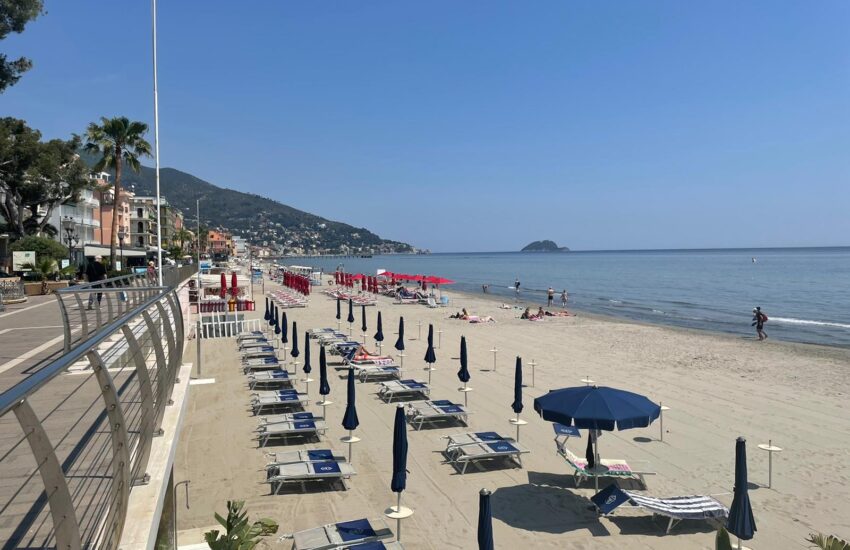 The Italian Riviera lies on the coast at the furthest west of Italy, close to the border with Monaco and France. The area was very popular with English nobility towards the end of the 19th century, transforming it from a fishing village and now boasts many Art Nouveau buildings. The airport itself sits deep in a valley surrounded by high terrain. While there is a localiser, you couldn’t really consider it as a typical ILS instrument approach. It needs plenty of extra briefing and a fairly high cloudbase of 2,500 feet. Commercial and complex operations require extra briefings, but private Part-NCO (Non-Commercial Operations) such as ours don’t.

Having stayed at Venice Lido for a couple of nights, we felt it was time to move on. The weather looked much better today at our destination, and we made an early start (actually a bit too early – breakfast didn’t open until 7:30), checked out by 8:30 and walked to the airport to arrive before it opened. One unfortunate tourist there asked us how to get to the main airport – he’d simply asked the local taxi driver to take him to the airport and had been dropped off here. There are no commercial flights from this 900m grass strip, so we gave him directions to the water bus and onwards.

The office opened on time and I quickly settled the invoice, buying a souvenir T-shirt to mark our visit.

We wore lifejackets, given the amount of time to be spent over water.

The tower wasn’t manned for our departure, so I just made traffic announcements and took off from runway 05. A few other aircraft were also on frequency, one for a low approach/flypast and another inbound to land. I was able to pass on the runway in use and QNH, with everyone sharing position reports.

When recounting this flight back home, another pilot asked me if I’d seen a block of flats during take-off. Cruise liners pass through the narrow channel on the climbout which you should check for prior to committing to take-off.

I flew at 1,000 feet south west, keeping well under controlled airspace at1,500, then called Padua Information who opened my flight plan. There was a short discussion about my planned track (it appears the flight plan route wasn’t available on screen), and my requested altitude (initially 4,500). Once clear of the base of Venice controlled airspace, I was cleared to climb without further ado. Since the specific words “cleared to transit controlled airspace” weren’t used, I double checked and there wasn’t a problem.

We passed close by Parma (where the ham comes from) and Bologna (the sauce), although the haze limited our lateral visibility. The ground below was very flat.

I was handed over to MIlan who subsequently approved a climb although only to remain outside controlled airspace. The mountains ahead rise up pretty quickly with some peaks around 6,000 feet. I climbed towards 8,500 before being comfortable to start a descent. Even then, there was a little turbulence due to the terrain below.

Milan handed me over to Genoa, possibly a little late because radio quality was quite poor by that time – perhaps I should have been more proactive in asking for a frequency change. Genoa was extremely quiet, quickly granting a transit through their airspace – just advise when changing altitude. My routing was direct across the bay, and I tried to commence my descent early but still ended up at 800fpm or so compared with the 500fpm rate that seems very calm and controlled. The tailwind increased our groundspeed to over 150 knots and I needed to lose 7,000 feet before VFR waypoint Casale on the coast.

Albenga Radio reported runway 09 in use, wind 100 @ 7 with the possibility to use runway 27 should I choose. I opted for runway 09 with a downwind join. This is where that extra high circuit practice at Voslau became beneficial because there really is some pretty high terrain close into the airport, requiring an enthusiastic descent on final. Our Garmin box was barking terrain warnings – “Pull Up, Pull Up” – so much that it became distracting and I turned it off.

Once stable, the runway is long and we made a good touchdown before backtracking.

A marshaller was awaiting us at the grass parking area, which looked freshly mown. He even bashed in some large tie-downs in case of strong winds, then drove us the very short distance across to the plush VIP terminal. A taxi was called and took about 15 minutes to arrive, and a similar time to get to our hotel through a long tunnel to Alassio on the coast.

We really felt we had arrived – the glorious sunshine, lovely sunny beach and welcoming hotel staff were all great to see. After a short walk around town, there was plenty of beach time followed by a great choice of restaurants for dinner.

We spent three days here, on the beach, exploring the small town nearby and visiting the famous botanical gardens.