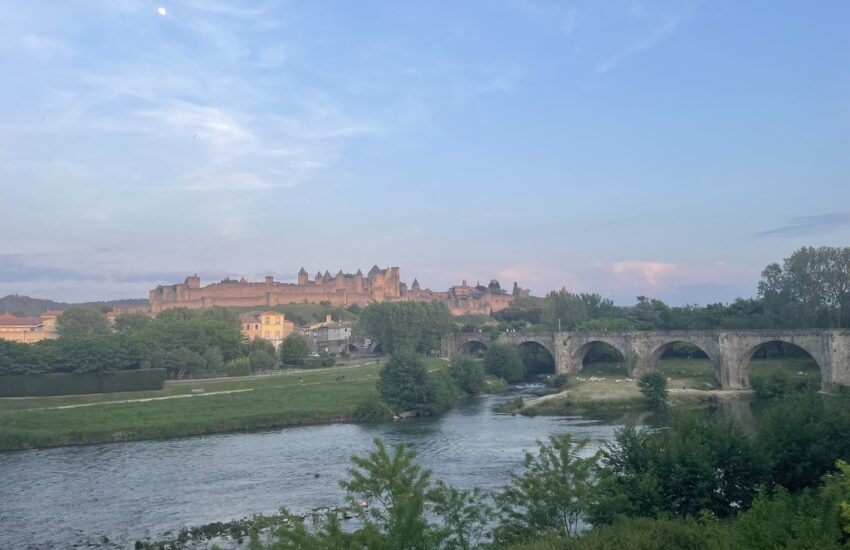 Our flight today was from Albenga (aka Riviera Airport) in Italy, westward to Carcassone in France. With no fuel available at Albenga, I planned a “technical” stop at Cannes (LFMD). The short flight along the coastline looked fairly straightforward, although I read some reports of harsh noise abatement penalties about Cannes that sounded quite severe. There is a mandatory pilot briefing on the airport website which required you to register with your pilot licence number, but on further inspection it relates only to IFR. For those arriving/departing VFR from France or other Schengen countries, there is no need for any Prior Permission/Notification, and simply studying the AIP should be sufficient.

We did wear lifejackets given how low down we would need to fly just offshore from Nice.

Albenga to Cannes along the shoreline

After departing Albenga, I was passed to a fairly busy Milan Information frequency that asked me for my estimate for the FIR boundary and to report there. I was positively co-ordinated with Nice who directed me initially to point Echo and along the coastline parallel to the main Nice airport at max 700 feet. This related to the Nice airport visual chart rather than the Cannes one, and required a 90 degree turn north but quite easy to find using SkyDemon.

I was handed off to what I recall was Nice Tower for the transit, and we saw/heard an airliner on final approach parallel to us while also getting some great views of the shoreline.

As you can see below, I had the Cannes airport geo-referenced chart superimposed on my tablet, making it quite easy to track the required circuit pattern accurately.

At point SB, I was handed over to Cannes Tower who directed me west, climbing to 1,000 feet and subsequently to follow a DA40 into the left hand circuit. That aircraft did a touch and go, resulting a late landing clearance. After vacating, Ground directed me to the pumps.

Although the AIP states there are two fuel pumps, one being BP card only and the other accepting any credit card, it seemed to me that both accepted any plastic. The max card limit of 300 Euros posted above the pay stations was also out of date, with 500 Euro limit being available. Reports that the machines only work in French are also out of date – there was a choice of languages on offer.

After fuelling up, I asked ground if we could park on the grass briefly so we could clear customs/immigration (required even for intra-Schengen flights) and pay my landing fee. As an exception, I was directed to a small grass parking area just to the north of the pumps – I think more regularly used by the Aeroclub – from which it was a short walk to the terminal.

The Douane officer asked if we were both crew, but since my wife doesn’t have a pilot licence we had to declare her as a passenger and fill in a form. Then out to the main terminal which is quite plush, has a pleasant/modern cafe, car hire desk and several handling agents. There is a specific desk for payment of fees, where the mystic art of compiling our invoice was completed and payment made.

Then back out to the apron via a second door. The customs officer conferred with his colleague that we had indeed filled in a form, and we were good to go. I realised that except for hotels, this was only the second time we had had to present our passports when crossing a border.

My planned route to Carcassonne took me north west via Avignon to avoid what seemed like a mass of red Danger areas, temporary control zones and other controlled airspace. My previous visit to the area had made the transit seem very straightforward and painless, so I was hoping to receive a similar easy pathway from ATC but this was not to be. Several NOTAMs warned of limited ATC capacity and redrawn zones.

I requested the more scenic departure via waypoint DR off the coast rather than an immediate right turn and was given the DR2 departure, and instructed to report ready at A2. A jet taxied past us to A1 and took off while I completed power checks. Around DR we were given a climb to 2,000 and handed over to Nice information. I turned north west, remaining outside controlled airspace but aware I would need a transit clearance in the not too distant future.

My next handoff to “Contact Provence” didn’t go well. There was a recorded announcement warning that the frequency was closed and that all aircraft should remain outside controlled airspace. I turned north to route around an active Danger Area, then west towards Orange CTA which had been NOTAM’d out of use (i.e. reverted to Class G). As I entered that, I heard the controller come on frequency and ask everyone to announce themselves. When I did so, I was instructed to turn south to keep clear of IFR traffic and subsequently allowed to proceed on track towards my destination.

When I reached the edge of his coverage zone, I was again given a frequency that was not in use. This time I went back and asked for a different frequency, was told he would sort it out, and got another one. The surprised new controller then passed me on to Montpelier which was a godsend. My request to route direct at 4,500 ft was granted – the specific phrases that we are used to in the UK aren’t typically stated here. The controller replied to my request with something like “you want to transit to Carcassone at 4,500 feet?”, I said “Affirm”, and that’s about it.

The rest of the flight was very straightforward. After leaving the Montpelier zones – I was with the same controller for quite some time – it was time to start a gentle descent towards Carcassonne. The ATIS confirmed runway 27 in use. The tower asked me to report at point EN, then NC, then right base, then final. We flew fairly close to the city and I got some great views of the medieval quarter, then had the whole airport to ourselves for landing.

Parking was in the GA apron, reached by a fairly narrow taxiway but opening out into plenty of space. There were only two other aircraft there when we arrived, but another taxied in shortly after us. The French pilot asked if we knew where the exit was, and I was able to point that out from my research. He called a taxi which we shared into town. I made sure to take a photo of the gate code, discreetly posted behind a pillar on the opposite wall, so we could get back in the next day. There is nobody else around to help if you forget to do that.

The city itself is a delightful tourist venue, with its well-preserved medieval castle that had not been invaded since 1206. It served as the frontier between France and Catalan until the latter was split between France and Spain around 1500. We opted for the walking tour with audio guide that allowed us to proceed at our own pace.

The city down below has several attractive streets, parks and at least one large square with many restaurants – at one of which we enjoyed a leisurely dinner, recognising this would be the last of our holiday.

We enjoyed reflecting on many happy memories of the past two weeks, and how lucky we were that the weather had enabled us to achieve all that we had planned.

I took some time to plan for our return the next day, checking the times that Gloucester would be open until, filing a flight plan and UK GAR form, requesting PPR for French customs including a GENDEC to Limoges where we planned to leave France after lunch and a final fuel top-up.

The next morning was spent wandering around the main city of Carcassonne, where we found a very large street market offering a huge range of products – everything including clothes, food, flowers, electronics and hardware.