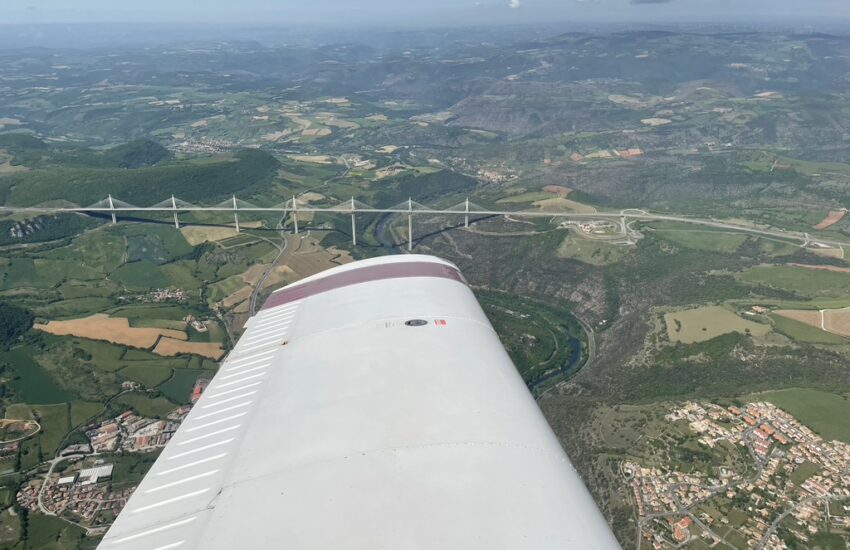 It was a fair distance to fly back home from Carcassonne, but we had the advantage of gaining an hour from the timezone change. The weather looked very good, a warm sunny day throughout. I added one last planned deviation – we thought it worthwhile to fly across to see the Millau bridge – a wonderful feat of engineering – which wasn’t too far out of the way.

My preparation had included emailing notice to Limoges to request PPR including Immigration/Customs clearance. I filed a “Y” IFR flight plan from Limoges for 1300Z (1500 local time in France, 1400 in UK) via Autorouter. There was no need to file one for the internal flight to Limoges itself.

Our taxi dropped us off at the main airport terminal where I asked about paying my landing fees. “No you can’t do that” was the friendly reply – I should expect to receive it later. The staff were just about to leave because there were no other flights for a few hours, so it was just as well I caught them in time.

We walked around to the GA apron, let ourselves in through the gate and pre-flighted the aircraft. A couple of other GA crews arrived around the time we were leaving but we didn’t speak to them. There was a little other GA activity, but nothing to delay us.

The controller cleared me to take off and subsequently report at “W” but I asked to depart north east via “EC”. This gave us another good view of the city, and I climbed up to 5,500 initially for our first leg towards Millau. The area information wasn’t busy, and confirmed our routing would be OK.

The Millau bridge was worth a detour. Perhaps I could have descended further to get a closer look, but it’s quite an impressive structure.

The Millau bridge is 343 metres tall, and was the tallest bridge in the world when completed in 2004 at a cost of €394 million. It has since been superseded by the Indian Chenab rail bridge at 359 metres and the Chinese Aizhai bridge at 350 metres.

I then routed almost direct to Limoges and got a “transit approved” from the next area controller.

Limoges Information accepted me flying on track, descending at my discretion and cleared me to enter the CTR to report right base. I was expecting to be switched to the tower frequency, but remained on the same one (probably band-boxed) for my landing clearance.

I taxied to the pumps and clarified that I could taxi across to the parking spot opposite after refuelling without needing a further taxi clearance. The controller confirmed that there was a flight plan for our 1300Z departure but advised that a slot time of 1321 had been issued. It just meant we would have a slightly more relaxed lunch stop.

The BP card worked without fuss and I topped up to full. There are signs on the machine which suggested it also accepted normal credit cards too but I didn’t try that. I’ve heard of pilots being caught out in the past because it didn’t and they had to make other arrangements to pay for the uplift.

You must then exit landside through a one-way turnstile (just to the south of the flying club), and must remember to take your pilot licence and passports.

We had lunch in the ground floor cafe of the airport, alongside departing commercial passengers and their friends waiting to pick up arrivals. It was very pleasant and relaxed in the sunshine, watching a BA Airbus land, decant its “self-loading freight” including one wheelchair user, refuel, refill with passengers and depart. The apron is carefully organised so as not to require any pushback.

We picked our time to head out through security, where my pilot licence allowed us to be security scanned, then passports inspected and stamped. Security led us into the admin office to pay our landing fee, which was waived because we had spent money in the cafe and had a receipt to prove it. Thereafter, with no commercial aircraft on the apron, we were able to walk through the one-way turnstile back to the GA apron and prepare for our flight home.

It does seem excessive to wear lifejackets for a flight that would take 2 hours to reach the coast, but it’s the most sensible approach and they are unobtrusive once airborne. When taxying out, I was asked to report three minutes prior to departure. I did that just before power checks and got my IFR departure clearance about one minute later.

It was very simple: unidirectional departure then climb FL100 direct AMB. No need to fly the SID, just take off and head for the waypoint.

The tower frequency held me until I had reached FL100 and then handed me over to Pontoise Approach. Directs came quickly, initially to LGL. Paris Control gave me a further shortcut direct to DVL, and subsequently warned me I would be in Echo airspace, so not separated from VFR traffic (even at FL100). Deauville vectored me to the west around their airport, with several heading changes, then direct to NEVIL on the FIR boundary.

The first London Control frequency worked well, and I was given clear and easy instructions to fly to NEVIL then GWC (Goodwood). The frequency was really quite busy, with the controller rattling off a continuous stream of instructions to a wide variety of airliners. This method of communication still seems quite archaic to me, where we have adopted methods of text messaging in so many other facets of life today. Airliners and business jets can use CDPLC to communicate clearances but it’s hard to see how it might evolve to cope with intensive vectoring in a frequently changing environment.

My next frequency was barely readable (maybe 2 out of 5), so after failing to make contact I reverted to the previous frequency and asked for a different one. That worked much better. I was given a routing up to Compton (CPT) and asked if instead I could cancel IFR and descend VFR, which I had filed to do. The controller explained that I could either cancel now or after CPT but not in between due to heavy traffic. I opted for the earlier choice, and after co-ordination with Farnborough Radar, IFR cancellation was confirmed and I was cleared to descend.

This proved an excellent and efficient route, allowing me to fly pretty much direct to Gloucester at 4,500 feet, keeping clear of Solent and Lasham, and above Fairford. I was handed off to another Farnborough frequency and downgraded to a basic service as I reached the limits of their radar range.

With just a few miles to reach Gloucester’s radio coverage, it wasn’t worth talking to anyone else. I picked up the ATIS and on first contact was given a standard overhead join. There were a couple of commercial school aircraft in the area, one flying an approach and the other with an exam callsign (probably doing a CPL skill test), plus a couple of others on frequency.

Runway 27 was now fully open after months of extensive work to flatten and resurface it, and this would be my first landing on the pristine new tarmac.

I had hoped to make a straight in approach but the conflicts meant that a standard overhead join was the simplest and worked out well. As my wife commented, this is the first time on the trip that we’d had to “fly round in circles” before landing, and it shows just how busy Gloucester can be even later on a Saturday afternoon.

After parking up, and decamping with all our luggage, I did managed to clean the windscreen and download the engine management data from the JPI. The harder job of cleaning all the bugs off the wings and elevator would have to wait for a few days.

It was great to be back home after packing so much in over the previous couple of weeks. CORB had performed well and hadn’t let us down. I’d only flown three IFR sectors and one instrument approach, but it was always good to know that we had the option to fly IFR should that be needed.

During our 13 day Grand Tour, we had:

A really enjoyable and satisfying trip, blessed by good weather and which benefitted from thorough pre-planning.