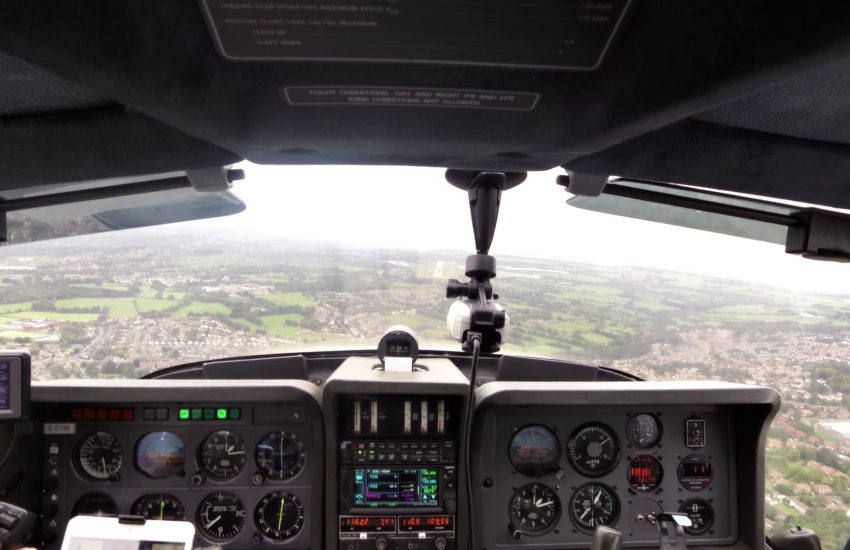 Our shared TB20 is back at Gloucester after some months of downtime with technical issues. I was keen to get back in the saddle, not having flown much IFR at all through the summer. I’d promised a flight in it to Mark, one of the Bristol Aero Club pilots, who had qualified to IR(R) last year. He’s a wheelchair user, so that was quite unusual from a logistics viewpoint.

On arrival at Gloucester, he didn’t think we’d be flying. There were heavy rain showers over Bristol although the weather to the north looked more promising. Looking at the overall picture, the cloudbase wasn’t too low (say 1500 ft and improving), the temperature sufficient (10C on the ground, with a freezing level around 5,000 feet) and the wind not particularly strong (less than 10 knots). There weren’t any embedded CBs around either. So after some discussion we agreed to go. This would be an IFR flight outside controlled airspace up to Leeds Bradford and back.

I booked in for PPR and confirmed the landing/handling fees – one of the more expensive in the country. I doubt it gets much GA traffic, with both Sherburn-in-Elmet and Leeds East much cheaper and lower cost nearby. The airport is much more focused on commercial traffic and business/executive jets.

We set off and climbed up to 5,000 feet, into and then above the scattered cloud layer. At the weekend, there isn’t a LARS service available from Shrewsbury so we just set the listening squawk for Birmingham. The autopilot worked like a charm. I routed overhead RAF Cosford, then to an IFR waypoint XAPOS, then north towards Leeds, descending the keep below the airway at 3,500.

We were in and out of cloud, with some mild turbulence at times. My passenger didn’t seem to mind.

On first contact with Leeds Approach, I requested a vectored ILS and was told I would be number three for the approach. I could hear they were Jet2 airliners from their Channex callsign. Hard to say how much of a delay to expect, but in practice this was just a few minutes. ATC sequencing and traffic management was excellent. As is common in these situations, rather than putting me into a holding pattern, I was vectored around a little bit at 3,400 feet including making a 270 degree left turn for spacing. This has to be done in stages on the HSI, otherwise the autopilot will turn the wrong (shortest) way instead.

ATC positioned me nicely for the ILS on runway 32 and gave me detailed instructions to intercept from the left at 3,000 feet, then when  localiser established cleared me to descend with the glideslope. My one mistake was initially to set the wrong heading on the CDI (340 rather than 320) which I picked up just before we flew through the localiser.

The plate also shows an alternative intercept at a lower altitude of 2,300 feet, closer in to the runway, which I expect could be used at busier times to fit in slower moving traffic (like me) in less time. I was switched to tower at 4 miles and cleared to land at around 2 miles/700 ft AGL. Surface wind was 250 degrees 11 knots – so a 90 degree crosswind. I let the autopilot fly it down to minima and landed manually.

SkyDemon allows you to overlay the instrument approach plate and shows your track in real time. With this mounted on the yoke, it provides great situational awareness to complement the GTN650. I only use it for horizontal positioning on an approach, not for the glide slope. There is some higher ground in the area, so the plate unusually has two MSA (Minimum Sector Altitude) roses in the top left, one for 25M range and one for 10M.

With a 2,000 metre runway, there was no difficulty making the midway intersection turn-off directly into MultiFlight’s apron where I was marshalled into my parking position.

The team there were very welcoming. The executive lounge is very plush and clean. The free coffee machine excellent. It’s just the price for a small aircraft to stopover that seems out of kilter. All I really needed was a parking spot, secure entry/exit point and a means of paying the landing fee.

The rain radar map below made it look a lot worse than the conditions we flew in – at least from an IFR perspective. There wasn’t a particularly low cloudbase, wind or freezing level to be concerned about. The worst of it had passed through before we got back to Gloucester.

I booked out VFR by phone and the tower was helpful in explaining the best routing. Climbing out to the north, there is rising terrain, resulting in a verbal terrain warning from the onboard Garmin. An early turn to the left towards Ilkley Moor (as in the Ilkla Moor Baht’at folksong) and then downwind south towards the Dewsbury VFR exit point gave us great views of Bradford on our right and Leeds to our left. 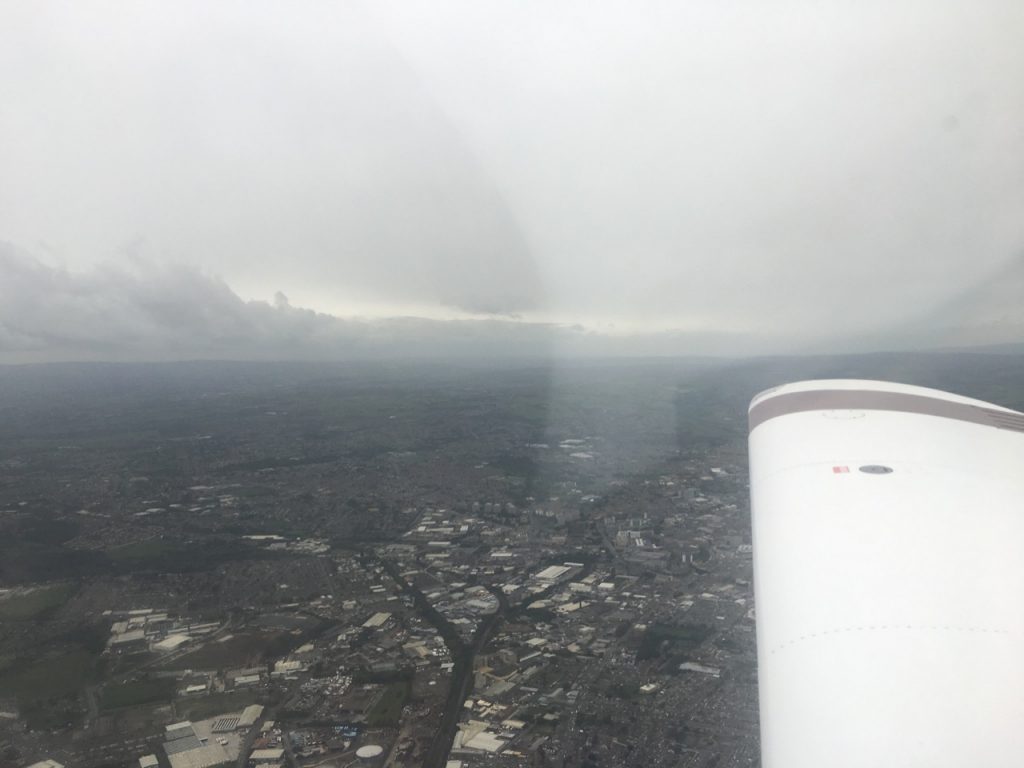 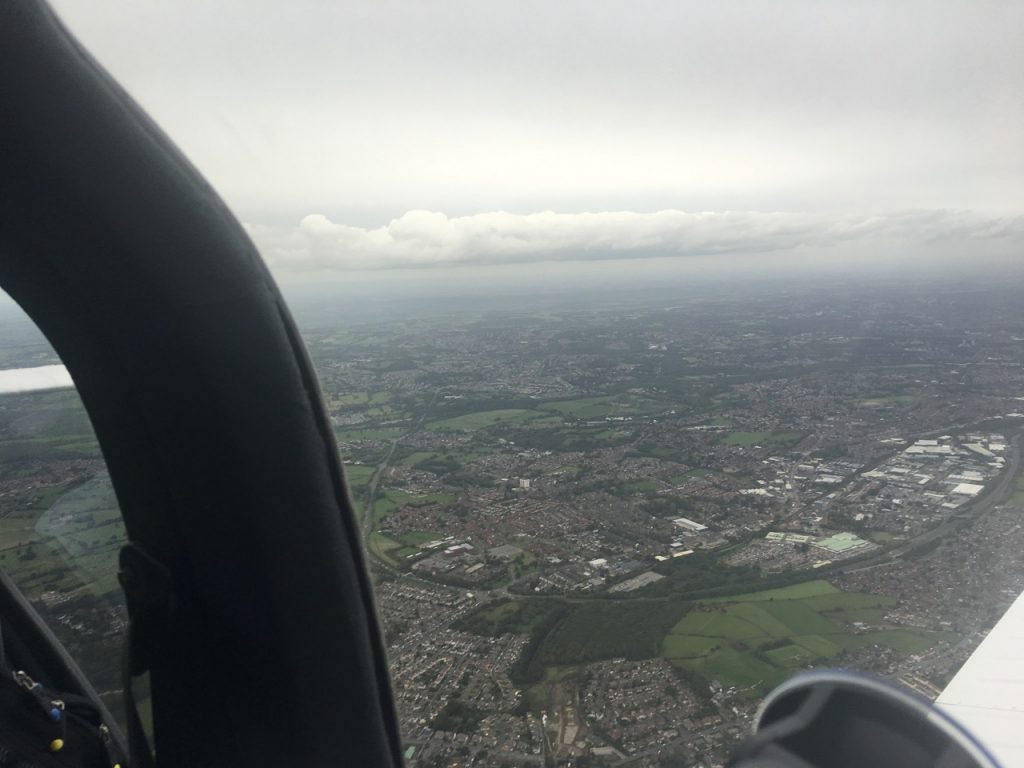 The trip home was fairly uneventful, again in and out of cloud at times. I flew the RNAV procedure back into Gloucester, again on autopilot, simply because I really enjoy seeing the machine fly itself. I should do this manually again soon so I don’t get out of practice.

It was quite difficult for Mark to get in and out of the aircraft. The small area of wing next the wingroot to shuffle up (you can’t sit on the flaps) and higher wing level makes it harder than (say) a PA28. Mark had said a Mooney seems comparatively appealing in that respect. Something large to have a built-in chairlift would be out of our price range.

Nonetheless, it was a good day out for us both and I was pleased to be flying CORB again after so much PA28 VFR flying over the summer. There’s a bit of rust to brush off, especially using the autopilot, but I was quite pleased with the success of today’s flights.

While it would have been possible to fly into Leeds East or Sherburn-in-Elmet today, given the cloudbase and visibility was adequate for VFR arrival, I felt it was much more controlled and safer being able to make full use of an instrument approach in both directions.