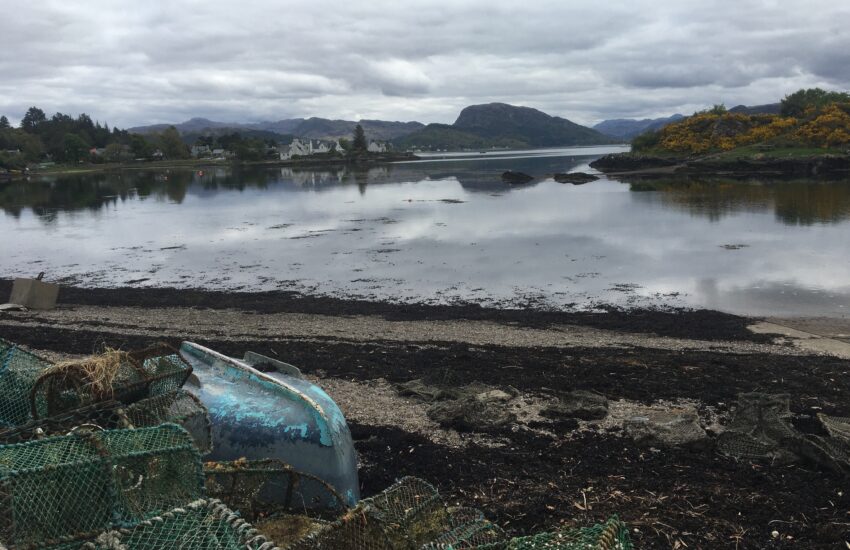 Plockton is a small harbour village on the west coast of Scotland, close to the Skye bridge. It’s one of the most scenic airfields I have visited with an enjoyable walk down to the picturesque seafront. I’ve been wanting to visit for years but each time I’ve tried in the past, the weather has been terrible.

The airfield is owned by the Highland Council and operated by PDG helicopters. The 600 metre hard runway is in fairly good condition. Tall trees previously blocking the runway 20 undershoot have been cut down. Weather in this region is quite variable and there is plenty of terrain around, so it’s best to pick a good weather day. Broadford airfield is nearby on Skye, and sometimes one or the other may not be VFR while the other is accessible.

Leaving Stornoway, we dropped off our hire car and asked at the information desk for someone to escort us through the gate to our aircraft. I had paid the landing fee by phone to ATC and booked out VFR. Lifejackets were worn for this sea crossing.

After departure, I flew at 2,000 feet southwest and had considered flying up Loch Torridon and down the valley directly into Plockton but the cloudbase on the mountain tops was a little low for that. So instead we were treated to a view of Skye, picking out Broadford airfield and the Skye Bridge before positioning downwind in the circuit at Plockton. Making plenty of traffic announcements in case anyone else was around, and keeping a close eye out for anyone walking or moving on the runway, it was really quite a straightforward approach. There can be low level turbulence depending on the wind direction, but the little wind was aligned with the runway.

The grass parking area was dry. Later, I met the volunteer who was mowing the grass and marking out the parking area properly. He reported that while the airfield typically gets around 600 fixed wing movements a year, there had only been about 10% of that due to COVID this past year. The numbers are based on those that pay the very reasonable £10 landing fee in the hangar honesty box (it is also possible to pay later by bank transfer if you forget, but it costs more).

We walked towards the village and quickly came across a newly opened cafe/take-away (Off The Croft) selling all sorts of cooked food, cakes and coffees etc. You can also walk down to the nearby coral beach from here.

Instead we walked past the train station (Kyleakin to Inverness line), the secondary school and down the hill past the primary school into the village. There’s an open air church (a small natural amphitheatre) on the way. The village hosts several hotels (good for lunch), pub, cafe and a tourist shop – you even can take a boat tour should you wish. Definitely worth a visit on a sunny day.

You could choose to stay in Duncraig Castle across the bay but do check their rates first – it’s quite pricey.