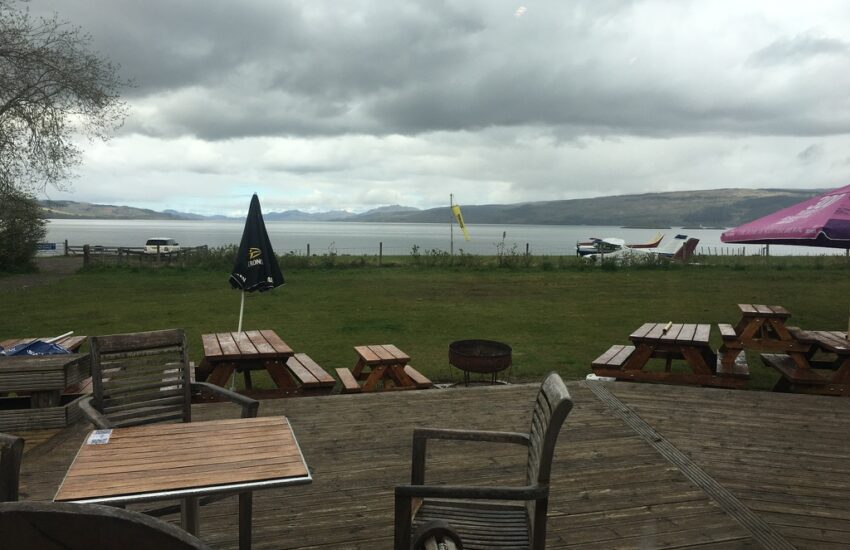 One of the primary goals of this trip was to visit Iona. It’s not a terribly easy place to get to, so being able to land on Mull is a great advantage. We had stayed at the Glenforsa Hotel before but not explored the island, so we allowed a few days to do that. You could potentially visit Iona by bus and ferry but there is only one possible timeslot – it’s two hours bus each way from Glenforsa to/from Fionnphort leaving three hours to cross by ferry and explore the island. Miss the bus back and you would be stuck.

Car hire is limited on Mull, and available either from the Mull Car Hire at Craignure Ferry Terminal or Harbour Garage in Tobermory. Given the variable weather, I wanted the option to cancel or change accomodation at the last minute. This combination led to us staying at the Isle of Mull hotel in Craignure from which I could hire a car. West Coast Motors operate a bus service between Glenforsa and Craignure (they have a great phone App), with Island Taxis at Craignure as an alternative. However, taxis are not always available on demand and may need to keep you waiting an hour or more while they come from elsewhere on the island.

It’s like buses – none come for ages then several in a group.

Despite Plockton being one of the least busy airfields in the country, we walked back to find another aircraft preparing to depart at exactly the same time to exactly the same destination. It was a Cessna 172 based in the hangar which must involve considerable logistics given the lack of fuel and maintenance facilities. He departed just as we started up. I departed to the south and turned west to give us glorious views of the Skye Bridge, flying between the island and the mainland (above the electricity pylons stretched between). The audible terrain warnings became tedious so I switched them off – the mountains above us left and right were all clearly visible.

It took us 30 minutes to complete a journey that would have taken almost 4 hours by car and ferry.

I took a short cut overland across towards Tobermory and flew down the Sound of Mull with Glenforsa easily spotted in the corner ahead. The Cessna called up and reported its position a few miles ahead of me. Glenforsa Radio confirmed the runway in use and that (apart from us) there was no other traffic. I spotted him above and to my left, so positioned to make an extended downwind leg to give enough time for him to land and vacate ahead. This slowed everything down and took the pressure off, allowing us to enjoy the view.

Taxying at Glenforsa involves crossing a concrete ramp parallel to the runway and into the main parking area. Brendan, the hotel owner, was there to show us where to park and help push us back into position. We retired to the bar while waiting for our bus and I learned more about the local area from the Cessna pilot.

Glenforsa Hotel has been further improved over the past year, expanding the bar area especially outside. Their webcam is a popular page for some, and it wasn’t long before a friend remarked that we had arrived.

We took the bus to Craignure (about thirty minutes including all the stops) and enjoyed a swim in the pool at our hotel before dinner. The hotel had re-opened after considerable refurbishment just that day, and we were some of the first guests.

The weather wasn’t quite so promising the next day, so we drove up to Tobermory, then west out to the Ulva Ferry and toured Duart Castle on our return. The roads in Mull are predominantly single track with passing places (and plenty of sheep), so progress is quite slow. It’s important to give way/let others pass you to avoid delaying the locals (especially if they are emergency workers). The mix of hills, trees, valleys, lochs and farmland made for more interesting and varied landscape than on Lewis.

The local island museum in Tobermory (free entry, donations welcome) had re-opened only the previous day. Although not large, It is well laid out and worth a visit, clearly explaining the island’s history. Others might prefer a tour of the whisky distillery.

We drove to the Ulva Ferry on the (mid) western tip of the island. Quite a long drive in time if not in distance.

On our way back, just south of Craignure, we dropped into Duart Castle which had been a stronghold of the Maclean family for generations, giving amazing views all around from the battlements. There was quite a lot to see inside.

We had dinner at Glenforsa which had a more interesting menu than our hotel. The langoustines tasted both fresh and properly cooked.

The next day we drove to Fionnphort (2 hours) and took the short ferry across to Iona. The sunshine was glorious, and after touring the Abbey and walking around the island we enjoyed lunch on the hotel garden with views across to Mull.

Two hours drive back to Craignure, dropped off the car, quick swim in the pool followed by a walk into the village to visit the pub which completed a very enjoyable last full day on the island.