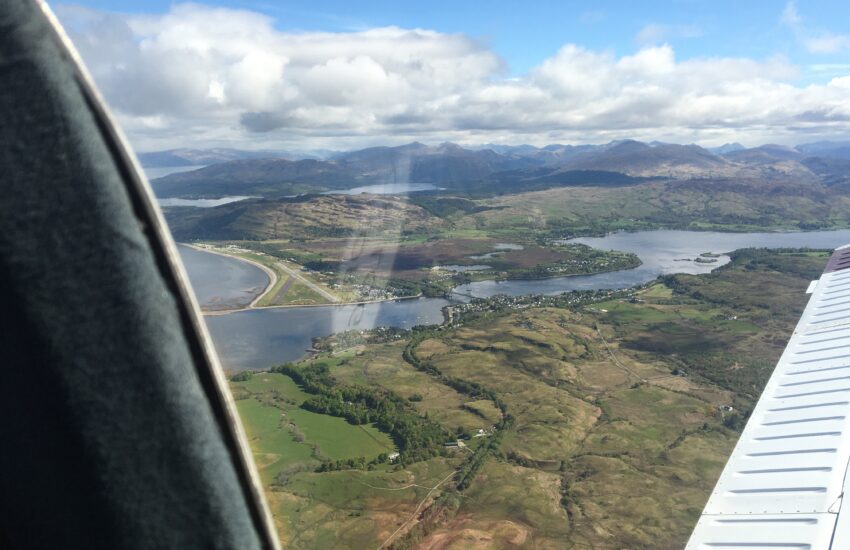 Today was the day to return home. We had enjoyed our extra couple of nights away and awoke to a lovely sunny day, with a good forecast for weather for our trip. We had a leisurely breakfast, strolled back to the airport, paid the landing fee and prepped the aicraft. I had filed an IFR flight plan using Autorouter for 10am local time and we were almost exactly on time. In what was now a familiar theme to this trip, here we were at an otherwise quiet airport with nothing much happening but another aircraft was gearing up to depart exactly when we did. The crew of a commercial charter twin prop appeared to have overnighted here and flew some passengers to Prestwick before continuing to Blackbushe. They seemed to have everything under control and be in plenty of time, sitting in the lounge awaiting their passengers. I researched that two year old Beech 200 turbo twin prop is operated by Dragonfly based at Cardiff Airport (next door to Aeros) and appears to be quite busy ferrying passengers mostly around the far corners of the UK.

The twin prop called for start slightly ahead of me, and backtracked while I was still completing my power checks. We were on the northerly runway today, and we saw him take-off and turn left in front of us while climbing away. He’d asked the FISO to activate his flight plan and was given a squawk, which I also did. It’s quite some way to controlled airspace from here, so we would receive our IFR clearance when airborne.

My filed route was very straightforward:

The route we ended up flying equally straightforward but somewhat different.

The left turn back over the water gave plenty of time to climb above the mountains to the east so we could quickly establish a planned track towards CLYDE (my first waypoint). Scottish Control cleared me to enter controlled airspace initially at FL100, routing us via Glasgow (GOW) and then Dean Cross (DCS) but subsequently asked if I could accept FL110 which I did (I had portable oxygen in use). This was to separate me from another similar aircraft flying from Wick to St Athan at FL90 that we heard from time to time during the flight.

It really was quite an uneventful and straightforward flight back in good weather conditions well above the cloud. Parachuting was active at Cark and Cockerham, so I was vectored around that and once clear then directed to WAL rather than MCT which amounted to a similar total distance.

Once south of Manchester and leaving the airways, I was passed to London Information who weren’t too busy and so could co-ordinate my planned RNP approach into Gloucester. I had picked up the ATIS from quite a distance – Runway 27, 4 knots of wind, scattered cloud at 1200, broken at 1700 – which made that seem a good idea. The single ATC controller working on a Saturday lunchtime suggested the airfield was unlikely to be very busy. At 30 miles I switched to them and was given an early clearance for the approach. In practice, there wasn’t much cloud below about 2,500 feet so (as with Stornoway) I could have cancelled IFR and requested a VFR direct join. But with other circuit traffic around, it did make the arrival very much simpler and smoother after a longer flight.

My one minor error was due to spending a little too much time on my simulator at home. Although I’ve replicated the avionics pretty accurately, I’ve cheated slightly by emulating an EHSI rather than an HSI. I’ve also been familiarising myself further with the G1000 which also operates the same way. The key difference is that when you key in a new track on the navigation box, or fly an approach, the box automatically sets the course pointer on the EHSI. On my real plane, the pilot has to turn the course pointer knob manually. Being out of practice, I overlooked doing that as we passed LAPKU and slightly overshot the initial approach track before I spotted my error and returned to track. It does show how important and worthwhile it is to match the avionics on a simulator as closely as you can. It also emphasises the importance of operating with a “pilot monitoring” mindset when letting the autopilot take care of the manual tasks.

However, when looking at the track log it wasn’t too wide a deviation and there was also a further one when turning onto final approach track where I did remember to turn the knob in good time.

We returned the aircraft to its hangar, tidied up and arrived home feeling quite relaxed and refreshed after an enjoyable holiday with a couple of unexpected bonus nights thrown. It is very satisfying when investment in the aircraft and the training to use it pays back. It was helpful to have the flexibility to cope with the unplanned delay.

Given how hard it might be to travel abroad this year, I’d recommend any pilot to consider a holiday trip to Scotland this year. You don’t have to go as far as I did, but especially consider the (changeable) weather, fuel availability and try to have as much time flexibility for contingency as you can. Just beware that Midgies can be an unpleasant problem in the summer!