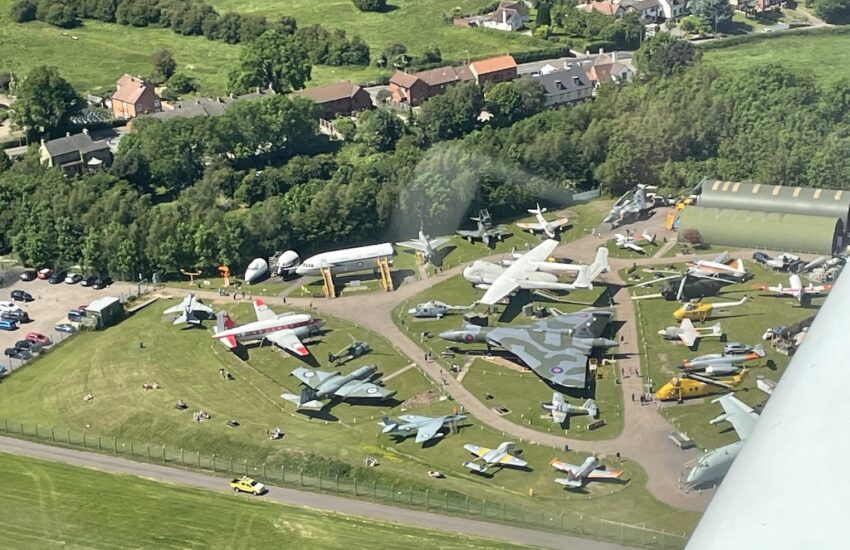 One of the new shareholders in G-CORB, my TB20, asked to join me for a day of buddy flying. Various options were considered but we ended up agreeing on a four leg route involving Tatenhill (near Nottingham), East Midlands, Sywell and back to base at Gloucester. One of my bucket-list airports has been East Midlands, a regional airport and a fairly important freight hub – the runway is long enough for the 747’s that remain operating for cargo.

GA used to be priced out of East Midlands when mandatory handling was introduced, but more recently the flying club has been permitted to provide that for smaller aircraft. They charge only their handling fee and the airport directly charge for the landing (actually they call it a departure fee) plus a small COVID surcharge, so the bill for that will follow later.

Gloucester wasn’t too busy for a Saturday morning, but we saw an incident immediately prior to take-off involving a commercial school Diamond DA42 which touched down really quite late and then locked up the brakes. A plume of black smoke arose from the tyres as it screeched to a halt and we heard the Tower asking if the crew required any assistance. They were able to taxi clear and not surprisingly said they would need to make a proper tyre inspection before their next sortie. It’s difficult for an instructor to react quickly in these situations, and he/she can only tell the student to release the brake pressure. Some years ago on a car skidding course, I’d been shown how to cadence brake (as we did before ABS in cars) by pulsing the pressure on and off quickly and repeatedly. Easier said than done when the runway end is rushing towards you.

Our route took us through Birmingham Airspace, with a VFR transit granted almost immediately and with few restrictions.

We dropped in at Tatenhill only briefly to pay the landing fee, then my turn to fly into East Midlands. It’s only ten minutes on a direct route, but I asked for a vectored ILS for practice. Despite generally low traffic levels everywhere, at that time I was number three in the sequence. The approach controller made it clear he would vector me in an orbit for spacing which he did with a set of clear, sequential instructions (turn right 240, then 270 then back to 090). A set of headings and we were vectored on at 3,000 feet. My rookie mistake (again due to lack of currency) was not setting the navigation box into VLOC mode as soon as I was given vectors (despite identing the ILS), but I thought I flew a pretty creditable stable approach and landing.

A marshaller from Donair was ready and waiting for us and escorted us into the building. They have set out quite a nice passenger lounge there with the complimentary drinks/snacks found in similar executive lounges elsewhere. We didn’t need to use it and only really wanted a toilet break and a taxi.

I had researched that the nearby East Midlands Aeropark had reopened, so we took a short taxi ride there and walked around the open air exhibition. They have a fair number of interesting aircraft to look at, including a VC10, Nimrod and Sea King helicopter. The viewing points give a good vista of the runway and airport buildings, but there were few movements. Our taxi driver told us we were his second ride in four hours – they are having a really tough time until the airlines restart.

Our VFR departure clearance was for the Shepshed route which is published on the Pooley’s plate. With almost no other traffic, the controller was happy for us simply to keep west of the M1 not above 2000 feet.

We dropped into Sywell and landed on the grass runway 32, making traffic calls throughout. It was quite busy on the ground and we stopped in by the Cafe for a drink. The runway and grass areas are in excellent condition and the airfield remains a popular destination.

The flight back to Gloucester was fairly uneventful, but I took the opportunity to circle around the Daventry VOR and get a fairly close-up picture of what it actually looks like on the ground. The was a moment of surprise when on final into Gloucester there was another tyre incident. The RV6 landing in front on us suffered a puncture which required the airport tug to move it. The quick thinking controller swapped the active runway to 36 and re-routed us to join right base causing minimal delay.

All in all a busy and enjoyable day out making good use of the aircraft. It’s nice to be back in the air again and exploring some new airports with a new pilot shareholder in our group.

I am also now tantalisingly close to reaching a milestone of 1500 hours total time.