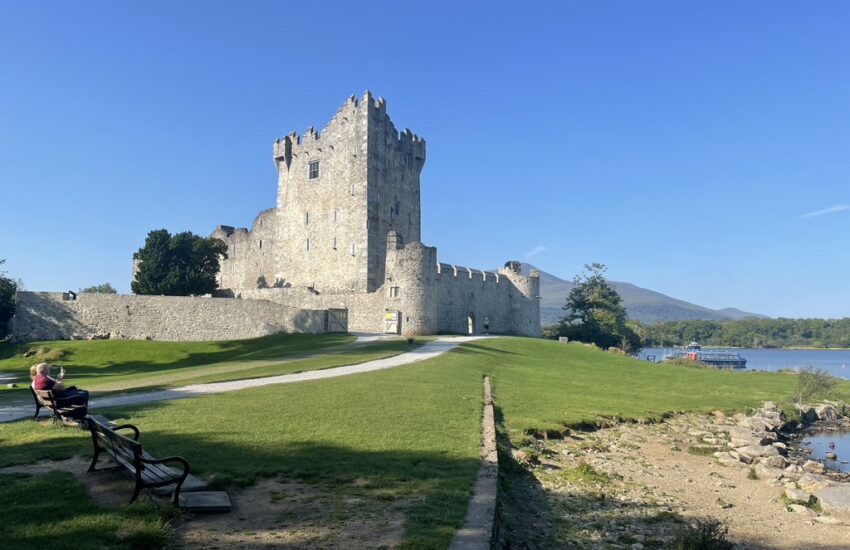 Back again. I enjoyed visiting so much on my brief club trip the previous weekend, that I returned with my wife in the TB20 to explore the region in more detail after stopping off for the day in the Aran Islands.

We had intended to spend a couple of days in Limerick and then a couple in Kerry. My desktop research uncovered that the normal fee for parking at Shannon airport was well outside my comfort zone, so I opted to land at Kerry and just rent a car from there.

The airport is friendly, easy to use, not busy and sensibly priced for GA. Flight plans are mandatory for all movements. We arrived direct from Inishmore in the Aran Islands, having filed a VFR flight plan and activated it with Shannon Information after departure. As we approached the mountain range north west of the field, I did wonder if I’d have to request an instrument approach but the visibility and cloudbase remained sufficient to remain well clear of terrain. ATC cleared me into the zone and instructed me to report left base for 08 which was easy to do. This is a 2000 metre runway frequented by Ryanair, so no problems. On reviewing the approach photos, I could see the original runway off to the left, now a taxiway and parking ramp, clearly marked closed with an X. We parked up about half way along it, abeam the large building.

After landing, the marshaller patiently waited for us to put the cover on, remember what I’d left inside and fetch it, then drove us straight to the terminal building where we walked out without delay. The car hire is at the very far end of the long term car park, so a bit of a hike, and after some delay we drove straight to Limerick (about 90 minutes away). The weather forecast wasn’t good for the next day, so I’d booked a decent hotel with swimming pool to keep us active. Unfortunately this meant it was also a wedding venue and we were kept awake by the more lively guests on Saturday night.

Sightseeing in Limerick and Kerry

As seems to be common in my limited visits to major Irish towns, Limerick is set astride a river (Shannon), has few tall buildings, a bit of traffic problem and nothing particularly remarkable to distinguish itself. It does claim the largest Georgian quarter outside Dublin but I didn’t regret limiting our time spent sightseeing here. Limerick Castle is the major landmark and is famous for a treaty signed in 1691, giving the nickname Treaty Boys to the local hurling team.

During our drive throughout the county, there were many flags and personalised banners everywhere urging the Limerick team to win the final of the All Ireland Hurling championship (they beat Dublin). It clearly gave a boost to the community after the dark times of COVID.

My initial plan for the return journey had been to stop off at Waterford and refuel but the deteriorating weather (cloudbase 100 feet over Cork and Waterford) required instead a top-up at Kerry and then direct flight home. Prior to departure I had filed VFR but on rechecking the weather considered I’d need some element of IFR. I was advised by the tower that it takes about 20 minutes to process an IFR flight plan, so was able to depart VFR to the zone boundary and then upgrade to IFR with Shannon once clear.

I routed via Cork to keep south of the weather and was able to maintain VFR on top at 5,000 feet. Shannon routed me via EVRIN on the FIR boundary, keeping me south of Waterford’s zone and then handed across to London Information. Higher cloud tops required a climb to 7,500 feet approaching the Welsh Coast, but thereafter the clouds dissipated and we had some clear views of the Brecon beacons. I joined VFR downwind for runway 27 at Gloucester with just one other aircraft on frequency at 6:45pm. It had taken just over two hours to fly the 285 miles direct from the west coast of Ireland.

The recent airspace review by the Irish CAA proposes to radically extend the size of the regional airport Class C airspace seems quite extreme to me and I don’t feel it balances the needs of GA versus commercial traffic.

In summary, I’d recommend a visit to Ireland although those without a full IR should be careful to pick a good weather window and/or be prepared to be delayed there.