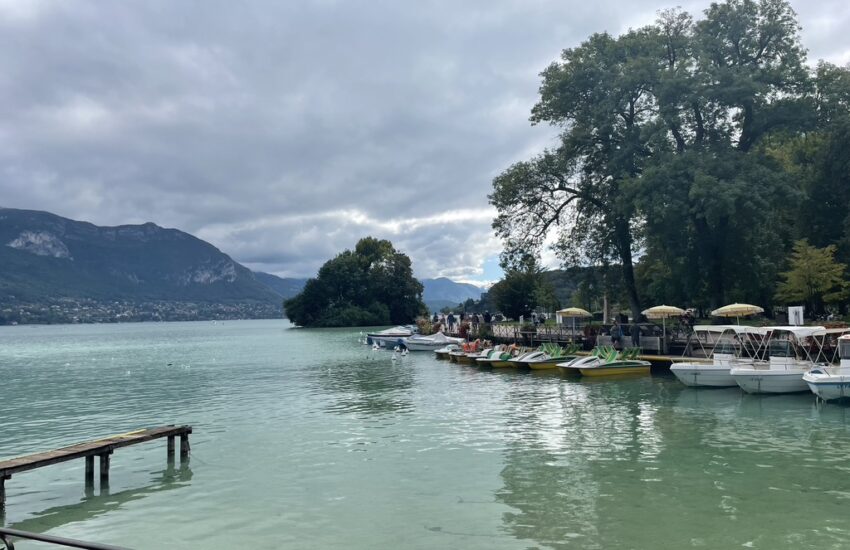 Our earlier planning had focussed on entering/exiting France, with all the regulations around COVID and BREXIT, aiming to visit Annecy and depart from Limoges. Some further flight planning we conducted in Auxerres involved flying into Annecy for some quick sightseeing and lunch, then onward as far south as we could while remaining in France. Figari in the southern tip of Corsica published a 72 hour PPR requirement so we were pleasantly surprised that they quickly accepted our request to arrive later that day. Fuel was also cheaper on the island, so we planned to uplift 100 litres at Annecy and fully refuel in Corsica.

The VFR departure from Auxerre for Annecy was straightforward – no need for a flight plan or any special formalities, just call up the FISO on the radio for taxi with the flight details. There were few clouds on departure and I climbed up to become VFR on top at 3,500 feet. As we progressed, the cloud layer filled in, becoming broken but still with a few holes that would allow us to descend if need be.

Clermont Information advised us that several Restricted Areas were active so we routed around them. SkyDemon graphically visualises these based on NOTAMS, but there were one or two that were not actively NOTAMed. Not sure why there would be a discrepancy, but this is where a flight information service comes in handy as a backup.

As we approached the mountains, it became clear that we wouldn’t make it directly over them – the cloud came down below the mountain-tops. Chambery Approach were brilliant, quickly approving transit of their airspace without any restrictions. They just announce “transit approved”, but later started to wonder what we were doing flying down the lake towards their airport. “Confirm which airport you are landing at?” We confirmed Annecy despite seeing Chambery temptingly directly ahead at the far end of the lake, and which would have been a much easier option.

Chambery is a popular ski-resort airport and very busy during the winter season, but at other times is very quiet and reasonably priced.

We flew half way down the lake then turned east into a large valley, then north back towards Annecy. The cloudbase was fairly low at times, perhaps 1,200 feet, but there was plenty of horizontal space to maneouvre – we could easily have turned back if required. The main road was an easy landmark to guide us in. We were warned about one Cessna a few miles from us then subsequently handed over to Annecy who gave us a long final straight in to runway 04.

We refuelled using our BP Card at the fixed installation. It’s really handy to have one of those when venturing abroad, saving time and effort of getting staff to come out and provide assistance.

The small terminal building includes a comfortable crew briefing room, passenger lounge, small bar/cafe within both indoor and outdoor seating alongside administration offices. It’s clearly all setup for executive jets and similar aircraft, but the landing fee was reasonable and staff congenial.

It took a little time for a taxi to arrive and drive us into town, but we were well rewarded with a pleasant and thriving tourist town. We wandered around, absorbed the atmosphere, grabbed a sandwich for lunch, then headed back to the airport for our 1500 local departure.