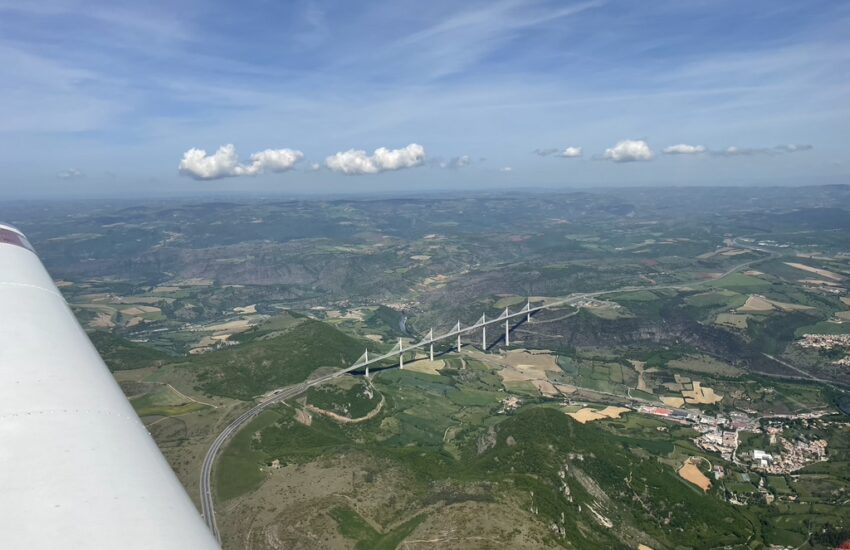 The flying highlight of my year was our two week European tour, making a wide circle around the Alps with stops in eight countries including Czechia, Austria, Slovenia and Italy. The vast bulk of my flight time was through instruction at every level from one-off “trial lesson/air experience” up to to completing full Instrument Ratings. I thrive on variety and exploring new places, using new techniques, learning about new equipment and aircraft.

PPL instruction at the flying club in Gloucester was quite busy in the first half of the year, with students already half way through their course keen to complete. January was surprisingly busy, completing two qualifying cross countries. When students cancelled lessons it was easy to backfill, and there weren’t many tech issues that grounded aircraft. I found myself less in demand at Brize Norton, where they have plenty of locally based instructors and it hasn’t been worth the long drive, but I flew an enjoyable IRR course with a senior army commander who had done his homework between lessons. At the end of the summer, demand for PPL training generally seems to have dropped off throughout the country, mainly I think as cost of living increases start to bite. Nonetheless, I did pick up a couple of new ab-initio students plus an IRR and a SEP renewal as well as a couple of night ratings.

In June, I began PPL instruction two days a week for a private aerospace company at Kemble. Employees are entitled and encouraged to learn to fly at a subsidised rate, spreading a wider understanding of aviation throughout the company. This used to be common in the past and it’s great to see senior management fully behind the initiative. Student experience and knowledge varies widely. It’s humbling to be briefing a new student about the basic operation of the ailerons, when for example they have an aerospace engineering degree and/or decades of experience designing or certifying airframes, but very rewarding to witness their joy when they take control for the first time and the broad smile on their face after the flight.

I’ve also flown with several students in their own aircraft, either through the Rate One ATO towards a CBIR and also privately towards an IRR. My CBIR students included a flight instructor based at St Athan, where we flew the fairly recently restored ILS, and a more mature pilot who completed and passed his skill test after training that had been extended and disrupted by COVID. I’ve become an instructor for one group share and have also instructed another of my G-CORB TB20 co-owners who renewed his lapsed IRR. Getting to grips with Garmin’s latest GI 275 multi-function AH/HSI/Engine Monitor panel unit has been interesting. The pilot manual highlights that QFE should not be used which I believe may be due to the possibility of incorrect or missing terrain warnings.

All this activity meant I have racked up over 1,000 hours of instruction since gaining my FI rating.

My interest in adopting flight simulators for PPL training continues, and I was particularly pleased when one of my foreign students completed his PPL course in 46 hours (the minimum is 45) despite a couple of lengthly breaks. We had spent a lot of time on his simulator (via Zoom) ensuring he was familiar with the G1000 panel, so didn’t waste time learning that in the air, and I coached him through many of the PPL lessons before he flew them for real.

I’ve also spent a lot of unpaid time developing and tailoring simulator instruments and scenery that I have contributed free to the community shared libraries. The value of a simulator session is very much increased when the cockpit layout and operation match real-life. That has rekindled some of my long forgotten coding skills and I’ve learned to use the basic functions of modern graphic design software. I favour X-plane 11 and Air Manager running on a dedicated Windows PC with few physical peripherals as a great training and currency tool.

I’ve also built my second club flight simulator, this time for the company in Kemble, and used it with several students. I find it is particularly good to instill good procedural discipline – running through the various checks – and correcting/improving radio use. I tend to encourage using it once students have learned the basic manoeuvres and are moving onto circuits, as well as VFR navigation which can include demonstrating the use of SkyDemon. For those at the IRR or IR stage, a simulator can be extremely effective and particularly useful to learn avionics operation thoroughly as well as knocking the procedural aspects into shape.

Since becoming approved as a Ground Examiner at the end of 2021, I’ve conducted a number of PPL theory exams at various clubs. Once you’ve learned your way around some of the quirks of the online system, it generally seems to work OK. Examiners are allowed to view the candidate’s screen (either by looking over their shoulder or on a duplicate monitor in a separate room), and I’ve found this improves my ability to debrief – the system spits out a “deficiency report” that lists numerical learning points which frankly isn’t much use. I have been giving some in-person ground instruction briefings to students which I have found quite hard to calibrate. The requirements are to pass the theory exam and to be competent to fly the aircraft, whereas I’m finding that some of the commercially available briefing material is out of date, excessively covers less relevant topics and skips examination trivia such that thorough knowledge would not guarantee an exam pass. All navigation theory courses I’ve seen continue to focus on the plastic circular slide rule (whizz wheel) despite the CAA permitting the use of electronic flight computers for several years. I don’t require my students to learn the whizz wheel at all.

I can understand why many instructors don’t do much GA touring themselves. You can get your aviation “fix” from instruction flights, but inevitably end up just re-visiting the same half-dozen airfields that you get to know very well. I’m keen not to let that happen, so want to ensure that I continue to make some trips further afield in my shared TB20 or a student’s own aircraft.

The European tour this year certainly ticked that box, departing Gloucester for the Netherlands, Germany, Czechia, Austria, Slovenia, Italy (east and west) and finally France. There was quite a lot of advance planning involved, but we averaged only 1.5 hours flying per day, leaving plenty of time for sightseeing and the beach.

Other TB20 trips involved a couple of weekends in Scotland, one as a PPL/IR flyout and the other as a family reunion. Colonsay, a short unmanned airfield west of Oban, was an island I’d like to revisit some day. Day trips to Lille, Jersey and Le Touquet made good use of the aircraft, interspersed with a few shorter flights for currency. The aircraft has been out of action for a few weeks towards the end of the year, when the annual service identified an issue with the exhaust. I’ve flown the first flight after maintenance a few times, entirely without incident except for the last one.

I thought perhaps it might be worth recording the more relevant regulatory changes in the past year. As an UK IR pilot, I was excited to read in February that the CAA now permit the use of GPS fix substitution. This effectively means that the archaic ADF is no longer required unless flying the final approach segment of an NDB approach. With ILS and RNP approaches being used 99% of the time, this shouldn’t be much of a limitation. I documented the current state of UK instrument approaches, identifying those few airport runways equipped only with them. Sadly, other parts of the CAA haven’t yet caught up with this change and there has been no updated guidance to IR examiners, instructors or ATC which limits the benefit.

The end of 2022 sees the end of the transitional period as the UK extracts itself from EASA. We are to be allowed to fit EASA approved parts to our aircraft, but cannot seamlessly ask EASA approved engineers to do so if we break down abroad (unless they have also been approved by the UK CAA).

The radio telephony training and practical exam was overhauled, with all R/T examiners required to re-qualify as FRTOL examiners. Instructors need to fill in a form confirming that all practical aspects of R/T have been taught prior to the exam. Tests are conducted and recorded using Teams or Zoom with no need to dial-up or swap between frequencies. I met one of the senior FRTOL examiners at a conference and he has put in considerable effort to develop training material and structure for this sometimes overlooked/underserved topic. Time will tell if the quality and understanding of R/T on the airwaves improves as a result.

A word of thanks to all those I’ve flown with and those who have supported my flying activities throughout the year – whether ATC, Firecrew, groundstaff, maintenance engineers, committee members, club volunteers, instructors, examiners, pilots or students – too many to name individually. Equally to my wife/lifelong partner who tolerates my obsession with good grace.

No complaints here. 353 hours dual flight instruction up from 252 the year before. But that excludes supervised solo, remote and in-person simulator time, groundschool and theory exams. I make myself available 4-5 days a week and find that weather, tech and student availability conspire against many flights. The alternatives of simulator and groundschool understate the wider scope of my activities. The wide range from first flight to IRR/IR and real-world vs simulator provide for quite a variety.

Another longer trip into Europe

My two week European tour more than ticked that box. The couple of excursions to Scotland were brief but enjoyable.

There’s more to be done persuading prospective students (and real-world pilots) of the value of disciplined simulator time. Some are already converted, and I’m pleased to have helped a number of remote students setup and configure their own simulators to match their own aircraft, then conduct them through specific training scenarios.

I’m tempted to say it’s more of the same:

Some photos of the highlights